In the Mix…The Bulls “Paint the Town” at Northbrook Court 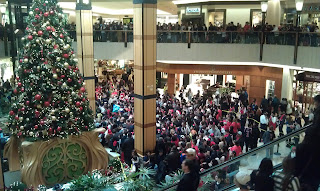 Tipping off the 2011-2012 basketball season and a “BIG things are coming” campaign, the Chicago Bulls greeted fans last week at our client General Growth Properties’ Northbrook Court. The LCWA team was on hand to help media in attendance capture the Bulls’ players while they met fans, signed autographs and posed for pictures. Starting at 6 a.m., fans filled Northbrook Court with eager anticipation of the players’ arrival. With staff from Northbrook Court working overtime to make sure the crowds were under control, LCWA was available for media and helped to answer questions from fans throughout the day. If Wednesday was any indication, the Bulls are going to have a lot of support this season!