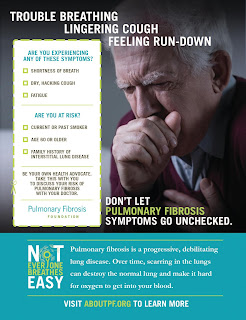 LCWA worked with the Pulmonary Fibrosis Foundation (PFF) to increase awareness about pulmonary fibrosis as part of our “Not Everyone Breathes Easy” campaign. This included securing and designing print advertisements to raise awareness about pulmonary fibrosis and the campaign with individuals who are at risk for the disease.
To foster a cohesive look for the campaign, we designed a printed checklist that could be torn and carried into the doctor’s office. This created a clear call-to-action and made it easy for readers to understand what may be putting them – or a loved one – at risk for pulmonary fibrosis. Additionally, it tied to the “Not Everyone Breathes Easy” microsite, where a downloadable Risk List is available on the AboutPF.orgwebsite.
With the checklist in place, it was important that each advertisement utilize strategic imagery and messaging based on the specific target audience.

Overall, the traditional advertising program secured four print advertisements and reached more than 19.3 million impressions, increasing awareness of the disease nationwide to those at-risk and encouraging readers to advocate for their health.