Looking at my posts during the last month, it’s clear that good things come to LCWA in twos! Two new clients, two clients on the “Today Show,” and now — two award winning campaigns. I’m proud to announce that two of our 2009 programs have won prestigious “Golden Trumpet” awards from the Publicity Club of Chicago!

We always appreciate the validation of our peers that comes with winning industry awards, and I’m proud of the hard work put in by these teams. Of course these award-winning campaigns yielded an even more important prize: happy clients! 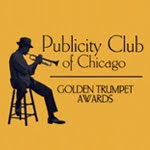