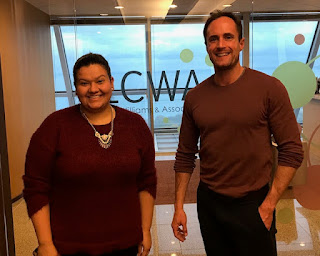 From a shrinking media landscape to increasing competition for journalists’ attention, public relations professionals across the globe face many of the same challenges. However, thanks to a recent visit from Ana Julia Castilho, an account manager with our Public Relations Global Network (PRGN) partner SMARTPR, the LCWA team got an inside look at the unique environment and role of the public relations industry in Brazil.
With clients such as Buzzfeed, Waze and Pinterest, SMARTPR specializes in technology and digital clients. While overall strategies and tactics for securing coverage may seem similar to our own practices, Ana pointed our several unique aspects that she and her colleagues must consider to maximize reach in Brazil:

Despite these challenges, the public relations industry in Brazil is booming. Global companies such as Skype, Avaya and Amazon Web Services (all SMARTPR clients) continue to enter the market and expand their presence – making SMARTPR’s work all the more important. We’re grateful we were able to host Ana and gain more global perspective from one of our newest PRGN partners!