This week a mystery sound took over social media, Batman came out of retirement and Chicago’s 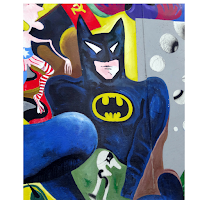 skyline is slated to get some work done. Get the social scoop here: