After winning at the IABC Chicago Bronze Quill Awards last fall, the American Academy of Sleep Medicine “Sleep Recharges You” campaign continued successfully to promote the importance of healthy sleep among teenagers. The continued effort paid off, as the campaign was honored with a Silver Trumpet at the Publicity Club of Chicago for Advocacy, and a Skyline Award from PRSA Chicago for Public Service – Associations/NonProfits. 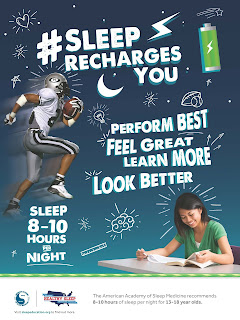 This campaign is part of a larger cooperative agreement of the National Healthy Sleep Awareness Project, a joint group between the AASM and the Centers for Disease Control and Prevention (CDC). A panel of sleep medicine experts concluded that teenagers 13 to 18 years older should sleep eight to 10 hours per night for optimal health. Our goal was to increase the number of teenagers sleeping the recommended number of hours per night.
LCWA and AASM created a tagline of “Sleep Recharges You” to focus on the positive effects of healthy sleep for teenagers. We targeted not only teens but also parents, school administrators, coaches and health counselors.
Our award-winning campaign built on previous successes including our aggressive media outreach about the official teen sleep duration recommendations. AASM released an official statement recommending high schools not start before 8:30 a.m., and LCWA created a downloadable template letter for parents to urge administrators to adopt these later start times. To signify the importance of this issue, we created several blog posts from AASM spokespeople.
LCWA created an online Bedtime Calculator for SleepEducation.org, allowing users to enter their age and needed wake time to determine their bedtime for optimal health and success. Unveiled during back-to-school season, the tool encouraged teens to set good habits for the coming year. It was supported with a press release, influencer partnerships and Reddit “Ask Me Anything” to drive awareness and clicks.
LCWA partnered with teen online influencers to spread awareness about the benefits of healthy sleep. A “Sleep Recharges You” video contest engaged teens by asking them to submit entries showing how to be motivated to prioritize sleep. Social ads targeting teens interested in health or filmmaking helped publicize the contest and increase submissions. A teen sleep advocate crafted several blog posts sharing the importance of healthy teen sleep.
An infographic and sharable “infosnacks” were developed, illustrating ways healthy sleep can recharge teenagers. LCWA shared content and conducted a social ad campaign, driving traffic to the “Sleep Recharges You” landing page. We also coordinated banner ads on websites geared toward teens such as TeenVogue.com, Seventeen.com and BroBible.com.
To reach educators, the AASM created an educator toolkit, with a full-sized poster, lesson plans and classroom activities on the importance of sleep to health, academic and athletic performance. The materials were available for download or mailed on request. Outreach to trade media publicized the educator toolkit and ways in which sleep benefits teens. Partnerships with associations generated an advertorial with the Society of Health and Physical Educators and an email blast to members of American School Health Association.
Overall, the campaign exceeded all objectives. Media outreach achieved more than 763 million impressions, with national placements including CBS This Morning, Chicago Tribune, The New York Times, Teen Vogue and TODAY. Five social influencers generated more than 587,000 impressions, and social and digital ads reach 1.3 million impressions. The high school video contest tripled the prior year’s number of entries. As a result of the educator outreach, AASM received more than 1,400 poster requests.