Twelve states. Twelve laws. Twelve anniversaries. What do these numbers mean for our client, First Alert? Twelve unique opportunities to spread awareness of the importance of 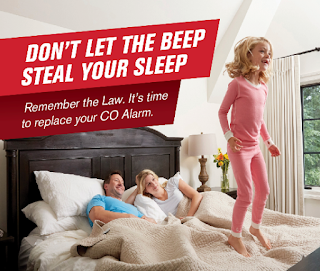 As part of our work with home safety client First Alert, we monitor and report daily on any pending smoke and CO legislation that may impact First Alert’s customers – from congressional bills to local municipal ordinances. With this information, we can help ensure that customers in the affected areas have access to the level of protection required, and conduct local media outreach to generate awareness and news coverage.
However, once the laws are on the books and the initial headlines fade, it’s important to remember that the impetus behind them remains as important as ever – and it’s up to us to keep these important safety requirements top-of-mind.
Milestone Management
One media relations “tool” that has proven particularly successful is leveraging the anniversaries of these laws to reinforce key safety messages. While many companies and industries mark significant anniversaries by the decade, the important number for us is none other than lucky number seven.
That’s because when many CO safety laws were implemented, many CO alarms had an expected, useful life of approximately seven years before expiration. When it comes to marking seven year CO legislation anniversaries, there’s no bigger year than 2018. That’s because in 2011 a wave of legislation initiatives brought CO protection to the forefront of home safety. A dozen states enacted the 2009 International Residential Code, which required CO alarms in newly constructed homes, or enacted CO legislation of their own. For people that complied when their state’s law went in effect, it is very likely that their CO alarms are in need of replacement.
Customized Communications
For First Alert’s CO Legislation Anniversary campaign, the LCWA home PRteam researched the laws of each affected state (California, Idaho, Kentucky, Louisiana, Nebraska, New Mexico, North Dakota, Oklahoma, Oregon, Virginia, Washington and Wisconsin). As no two laws are exactly the same, it was critical to uncover any nuances and specifics in order to draft customized, accurate press materials that we could use in each state.
While this approach takes significantly more time and effort that a one-size-fits-all press release, these extra steps provided our team with relevancy, credibility and trustworthy expertise when approaching local media. Our team was able to go beyond simply providing general information – and instead explain the specific impact for citizens in each jurisdiction.
Preparation – and persistence – leads to success, and as of today, the program has yielded more than 88 million media impressions. However, what impresses me the most is that these numbers were achieved through good, old-fashioned pitching. It’s “safe” to say (no pun intended) that few media would have even been aware of their state’s anniversary without our efforts – let alone cover it.
As the lines between advertising and public relations continue to blur, it’s a good reminder that PR is uniquely positioned to make the most of these types of opportunities for our clients.