LCWA Delves into the Past to Tell Brand Stories 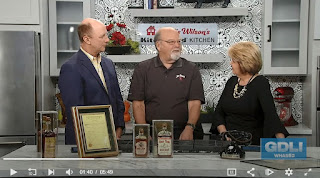 Earlier this year, when long-time client Beam Suntory (JimBeam® Bourbon) tasked us with helping to bring its 223-year history to life for its large internal audience and loyal consumers, the Heritage PR Team at LCWA met the challenge with a number of creative and effective tactics.

We started with an aggressive identification and collection of historical materials such as photos, documents and artifacts. These materials, many of which were unearthed in libraries, university archives and museums, as well as family members’ basements and attics, were digitized and uploaded online for employees to utilize to help communicate and market the brand story.
The Beam story came to life in another fashion last month when I had the privilege and pleasure of hosting a two-hour storytelling session for top sales representatives at the company’s annual sales meeting in Las Vegas. In addition to trying my best to entertain my audience with tales of the Beams, I had the opportunity to present the only film footage of Jim Beam ever taken (1938). Our team discovered the footage after months of searching, ultimately finding it in the possession of a distant family member in a small town in Tennessee. The highlight of the session, however, was the appearance of Jim Beam himself, an actor selected and scripted by LCWA. Old Jim regaled the audience with stories about his youth as well as the family’s struggles through Prohibition.
Most recently, we brought the Beam heritage story to the small screen in Louisville, Ky., a vital and highly competitive market for Beam Suntory. Master Distiller Fred Noe, Jim Beam’s great- grandson, appeared on the local ABC affiliate, WHAS-TV, and presented a number of never-shared-before items with viewers, including rare bottlings dating back to the 1890s and the original letter written by Jim Beam requesting reinstatement of his liquor license after Repeal of Prohibition in 1933.  We hope to coordinate similar television appearances around the country over time.
As the company’s 225th anniversary approaches in 2020, we look forward to remaining immersed in the Beam Heritage Initiative through continued research and creative programming that highlights the remarkable story of the First Family of Bourbon. Stay tuned!