August 14, 2018
Recently, LCWA worked with CNN International to profile the storied history of JimBeam in a segment for the station’s “100 Club” program. Featuring brands rich in history with legacies dating back more than 100 years, the “100 Club” segment was a perfect chann 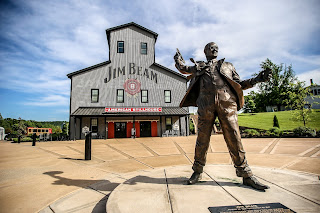 To help tell this story, LCWA arranged one-on-one interviews for CNN producers at the historic Jim Beam Distillery in Clermont, Ky. with Seventh Generation Master Distiller Fred Noe and his son Eighth Generation Distiller Freddie Noe. Together, they spoke about the family’s history, sharing tales of the generations before them, and the bright future of both the brand and bourbon category.
The segment also shared moments of Beam’s faithful fans touring the Jim Beam American Stillhouse – the first stop along the infamous Kentucky Bourbon Trail – and highlights from Fred and Freddie’s interactions with them as they tasted the history found in all of Jim Beam’s fine bourbons.
LCWA supplemented the interview with drone footage of the distillery, behind-the-scenes b-roll, and never-before-seen post-Prohibition footage from the Beam family archives featuring Jim Beam. The added visuals helped bring the story to life.
The segment aired globally across CNN.com and quickly sparked attention from bourbon fans as far as Singapore. Cheers!