Across the country and here in Illinois, many older adults face the challenges of hunger for a variety of reasons: poverty, disability and lack of social support or transportation.

According to a report from longtime client UnitedHealthcare, approximately 15 percent of 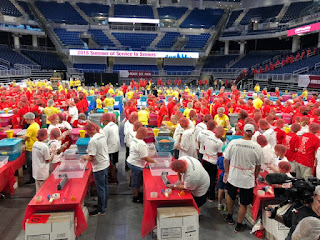 U.S. adults aged 60 or older — about 10 million people — are food insecure, meaning they eat less or their eating patterns are disrupted because of a lack of resources. The numbers in Illinois are slightly worse and trending in the wrong direction. In the past five years, the rate of food insecurity in our state increased from 12.5 percent to 15.3 percent. This means nearly 1 in 6 Illinois seniors often go without and Illinois ranks below average nationally at No. 33.

Research shows food insecurity is a strong predictor of health problems such as heart disease, cancer, stroke, pulmonary disease, depression and diabetes. As 10,000 Americans turn 65 every day, this is an issue we cannot ignore.
By ensuring older adults in Illinois have access to food — especially healthy, nutritious foods — we can help them live longer, healthier and happier lives. Businesses, nonprofits, community groups and individuals in Illinois must work together to fight hunger among our older citizens.
In an effort to meet this growing need, UnitedHealthcare (UHC) partnered with AARP to help provide one-million meals to be distributed to in-need seniors throughout the Chicago-area.  UHC volunteers, along with volunteers from other supporting companies such as Chase, worked diligently on a Saturday, rapidly filling and packing bags and boxes full of ingredients that would make for a nutritional and filling meal.
LCWA did its part by not only participating in the filling and packing, but by securing interviews for UHC’s Rick Dunlop, CEO of UnitedHealthcare Medicare & Retirement in Illinois, on both WGN radio and WGN-TV. In addition, the LCWA team provided a continual stream of on-site photos for use on UHC’s social channels.
By all measures, the event was a success and UHC and AARP plan on holding a similar event in Washington D.C. in September as part of the “Summer of Service for Seniors” initiative with the goal of providing 2.5 million meals this year to those in-need.