What Happens in Vegas: Highlights from the Trex Booth at IBS 2020 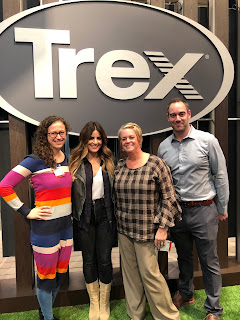 Contrary to popular opinion, what happens in Vegas doesn’t always stay there – especially when you play your PR cards right. With a combination of strategic media outreach, well-timed social content and an in-booth appearance by a special celebrity guest, the LCWA team helped longtime client, Trex Company, hit the jackpot at this year’s International Builder’s Show(IBS).
One of the first major industry events of 2020, IBS proved an ideal platform to set the stage for the year ahead. Trex unveiled a new, experiential booth complete with scenes, settings, sounds – and scents – that evoked the sensations and enjoyment of outdoor living. The impressive exhibit showcased the company’s robust portfolio, including three new collections, and offered a virtual product playground for attending dealers, as well as representatives from 42 different media outlets who accepted our invitation to stop by during IBS to tour the Trex booth.
Through proactive pre-show outreach and long-standing personal relationships, our team booked a record-number of appointments with media that cover outdoor living products and design. Already, these meetings have resulted in coverage by leading trade publications, such as Building Design + Construction, Casual Living, HBS Dealer, LBM Journal and ProSales.
We also attracted the largest turnout of editors ever from high-profile consumer media ranging from Architectural Digest and Better Homes & Gardens to Veranda and Wirecutter. We even converted popular DIY blogger (and former composite skeptic), PrettyHandyGirl, into a Trex believer! Additionally, several outlets, including A&E Network, DIY’s “I Want That,” “Today’s Homeowner” and Professional Builder, shot video footage in the booth that will run in the coming weeks and months as we head into outdoor living season.
Beyond attracting a steady flow of influential media and camera crews, LCWA also arranged for Alison Victoria, host of HGTV’s “Windy City Rehab,” to make a special appearance in the Trex booth during IBS to greet fans, take photos and sign autographs. A long-time Trex devotee, Alison regularly specifies Trex products for the outdoor projects she designs. Be sure to check out Season 2 of “Windy City Rehab” later this spring to see Alison – and Trex – in action.
All in all, it was an exciting and productive couple of days in the Gambling Capital of the World. With the deck now strategically stacked in our favor, it’s a safe bet that what happened in Vegas will deliver a big payout for Trex in the form of valuable media coverage throughout 2020.